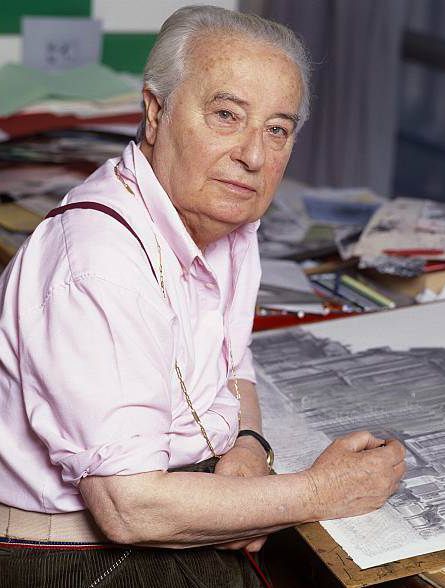 1924         Finished Kalousdian Armenian School in Cairo, obtained an American scholarship to go and study in Paris

1929         Graduated from the School of Architecture in Paris. As an autodidact, attended the Montparnasse Art Academy (La Grande Chaumière) in Paris, France

Since 1930      Takes part in the exhibitions of the Union of Armenian Artists "Ani", Paris, France

Since 1941      Takes part in the exhibitions of the Autumn Salon, Paris, France

1991         The Church of Manosque (Provence, France) in which he had decorated the chapel became Carzou Foundation

2007         Personal exhibition devoted to the 100th anniversary of his birth was held at the National Gallery, Yerevan, Armenia 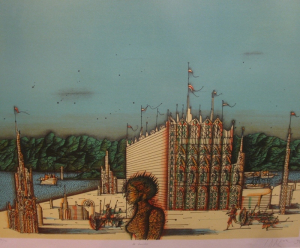 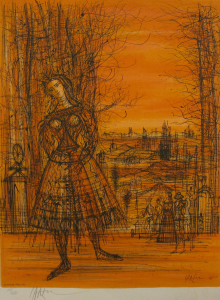 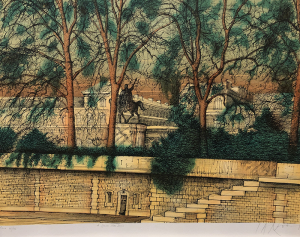 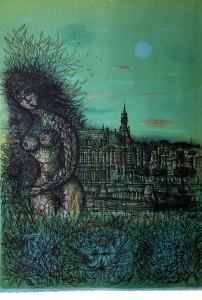 The Woman in the Palace

The Knight and His Princess In the sphere of different groups, absorbed in the mania of modernism and flows of modern art Carzou searched for and found «the modern» in his identity. His being an architect, that is the soul that searches for beauty, played an important role in his life. The content and means of expression of Carzou's art are linked to contributions of classical art and have spiritual connection with such masters of past as Kahlo, Claude Lorrain, Watteau, Ingres. In his paintings reality transforms into zealous and graceful connection of lines, imagined worlds, where poetical feelings and lyrical emotions throb, that touch upon the eternal beauty of life and nature. In this regard Carzou is the inheritor of fineness and simple beauty that gives original gleam and warmness to French art.

At first sight Carzou's paintings seem to be a sheaf of lines. But we can clearly see, that they represent cities, buildings, forests, ports, human figures. The line is the main means of expression in Carzou's art.

Carzou, nobody could paint better than you the inhuman face of the world, the dead surface of the Planet, where horror is reflected as in a mirror.

Writing an article about the genius Carzou was on my mind for a while. The first reason for me to want to write about him was that he was a famous personality and of Armenian origin. Carzou started his painting career with experiments in abstract art against a black background and produced surrealist compositions under the influence of Cubism. He abandoned these after 1938, taking up color and establishing his own style.

In a 1955 survey Carzou was acclaimed one of the ten major painters of his generation. Zouloumian was also an illustrator of literary publications of authors like Jules Verne, Andre Maurois, Audiberti, Albert Camus, Shakespeare, Rimbaud, T.S. Eliot, Edgar Allan Poe and Hemingway.

This great multi-talented artist was survived by his son Jean-Marie, who is a well-known writer and has kept the Armenian case alive by writing a book on the Armenian Genocide.